Musings on the enigmatic ending to “Taxi Driver”

Posted on March 7, 2013 by peanaughtgallery 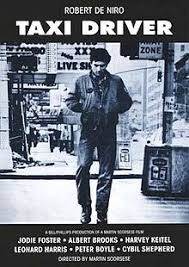 Hey Mike,
Are you talking to ME?
Oh yeah I guess you were.
I’m here in the Peanaught Gallery and glad that you caught Taxi Driver on the tele last night.  It is a great movie. Not the definitive Scorsese movie, but Martin working feverishly as a rising director still testing the limits of his creativity.  It is notable for absolutely capturing the state of Manhattan in ’76, which Mean Streets failed to do convincingly (most of MS was shot in LA, which becomes apparent after repeated viewings).  Only Woody Allen has done equivalent work in capturing the feel of The City, post-1960’s.
Each and every character is memorable, from the guy playing the drums (I remember him in real life) on the street, to Wizard (Peter Boyle), through Betsy, Pallentine, and of course Travis and Violet. So much could be said about each character but I don’t think I could add much more insight to what’s already been said. Of course,  Scorsese had an excellent production team and a lot of the film’s success has to do with the taut screenplay by Paul Schrader.
As you pointed out, the most controversial aspect of Taxi Driver is its ending. To my surprise, Scorsese has said the that the ending is not a fantasy; Travis did survive and become a hero.  This seems odd to us looking back from a 21st century vantage point.  But we have to consider the cultural context in which the film was made.  This was NYC pre-Son of Sam, post Ford to City: “Drop Dead”,  when Abe Beam was mayor and Manhattan was every bit the cesspool that Travis said it was. Bernhard Goetz, the NYC “Subway Vigilante” is still 8 years from unloading his revolver into those four young men. Disco was still a year or two away from glamorizing The City (Studio 54 did not open until 1977), hookers had spread beyond their Time Square locus to the Rockefeller Center and so did the $10 “massage” parlors. I know ’cause I worked in the area at INCOTERM from the Fall of ’76 through Summer of ’78,  in the Time-Life building.  People were “Waiting for Superman” to arrive (or was it Batman?) to clean up the city.  So Travis pretty much spoke to New Yorkers who were fed up with a political system and city institutions that seemed to have broken down.  It is also interesting to note that Woody Allen did not make any films about NYC during this era; it wasn’t until 1977 that he released Annie Hall, and this did not overly romanticize the City the way his Manhattan did a year later.
Thus I assert Travis to be the fantasy character that many working-class New Yorkers identified with: someone who had the guts to stand up for what he believes in, confront a corrupt and uncaring political system and take on the rampant sex-slave traffic (which in reality fueled all those massage parlors).  Betsy represents Travis’ attempt to fit in with the upwardly mobile crowd which seemed to be unaffected by the miserable conditions the City had fallen in to. In a larger sense, she also symbolizes the corrupt political institutions which exist to ensure their survival and not that of their constituency. In reality she is not a very interesting character and actually is written rather shallowly in the screenplay.
Now to move on to the ending.  I too first concluded that the ending was total fantasy; Travis hadn’t survived or if he did sustained massive injuries. I thought that his return to life as a taxi driver was a dream and reconnecting with Betsy just another episode in it.  But  there was always something disconcerting about that conclusion, some tension that is unresolved by the time the final credits role.  While not resolving the dissonance, it can be placed into a more satisfying context if the following is considered. Travis does indeed survive the shooting, is hailed as a vigilante hero and that Shallow Betsy and Travis do indeed meet up in one of those serendipitous moments so characteristic of life in New York City.  In this way the tension is moved, though not relieved, from the pathos of a dream/fantasy that cannot possibly be fulfilled to Travis’ survival and anointment as a hero, despite what appears to be violence he helped to provoke. In real life this tension is usually resolved by holding the vigilante accountable for his actions: e.g., Bernhard Goetz in the 80’s, George Zimmerman in the present.  In Taxi Driver, Scorsese leaves this tension unresolved, hence creating a striking, controversial, if not enigmatic bit of film making.
Andy
“anytime, anyplace”

2 Responses to Musings on the enigmatic ending to “Taxi Driver”